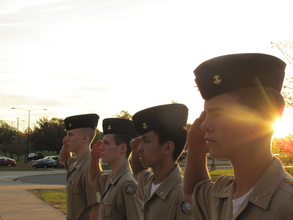 The﻿﻿ ﻿MISSION  of ﻿﻿﻿the﻿﻿﻿ Naval Junior Reserve Officers Training Corps (NJROTC) program is  to instill in students the values of citizenship, service to the United States, personal responsibility, and sense of accomplishment.

The NJROTC curriculum emphasizes citizenship and leadership development, as well as our maritime heritage, the significance of sea power, and naval topics such as the fundamentals of naval operations, seamanship, navigation and meteorology. Classroom instruction is augmented throughout the year by community service activities, drill competitions, field meets, participation in academic competitions, STEM (Science, Technology, Engineering, & Math) / CyberPatriot competitions; visits to naval and other activities; marksmanship training; and other military training. For active cadets, the greatest benefit is personal growth, leadership development, and the opportunity to realize untapped potential.

"The Junior Reserve Officer Training Corps (JROTC) program was the brainchild of Army inspector, LT Edgar R. Stevens, who in 1911 begin teaching high school students the values and disciplines of a military life in the hopes of molding these students into better citizens. From this idea came the formation of the JROTC program with the signing of the National Defense Act of 1916 and the establishment of the first JROTC at Leavenworth High School in Kansas in 1917." (Introduction to the Navy Junior Reserve Officer Training Corps)

The Navy JROTC (NJROTC) program was established by Public Law in 1964 (Title 10, U.S. Code, Chapter 102), and the first NJROTC programs began in 1966.  The program is conducted at accredited secondary schools throughout the nation, and taught by instructors who are retired Navy, Marine Corps, and Coast Guard officers and enlisted personnel.

In 2009, the Secretary of the Navy authorized the establishment of the NJROTC program (Black-Hawk Company) at Brooke Point High School - one of five public schools in the Stafford County Public Schools system, located in Stafford, VA.

In September 2017 Black Hawk Company increased the number of cadets over 150 and formally became a Battalion.
Powered by