​BLACK HAWK BASIC: JUNE 6-9, 2022
DAY 4: JUNE 9, 2022
The last day of Black Hawk Basic consists of all the platoons (Honor, Courage, Commitment) competing against each other with everything they learned from PT, Orienteering, Air Rifle, Academics, and Drill. PT had cadets do relays while carrying ammo cans. Then they played Tug of War against each other. While PT was going on, one cadet from each platoon did Orienteering. Air Rifle had two cadets from each platoon shoot balloons. Academics played the game: Jeopardy. Lastly, Drill did a few rounds of 'Knock-out.' At the end of competition, our Booster Club provided pizza and other snacks for everyone apart of Black Hawk Basic. Awards were given by team commanders and platoon commanders on who they thought were outstanding. All of our days finished with success and with positivity. Everyone had a great experience and made new friends as the days went on. We're excited for the school year to start and can't wait to see all the cadets soon!
Article written by Cadet Kaila Kratz - Public Affairs Officer
Pictures taken by Cadets Richard Schmidt and Kaila Kratz
DAY 3: JUNE 8, 2022
The PT Team started the morning off again with a lap around the band field, and five rounds of the game: Sharks and Minnows. The Cyber Patriot Team gave a presentation about their team and how their competitions function. After Cyber Patriot's introduction, everyone filled out a survey to talk about their interest on the team and other questions they had. As for the rest of the teams, they began to prepare the cadets for tomorrow's Competition Day. Like yesterday, cadets began to show more interest in teams by contacting team commanders and signing up on interest/practice sheets. Day 3 has finished on a strong suit, and we are all excited for Competition Day!
Article by Cadet Kaila Kratz - Public Affairs Officer
Pictures taken by Cadets Kaila Kratz, Nehemiah Thompson, Isabella Robertson, and Richard Schmidt - Public Affairs and Staff Members of Black Hawk Basic ​ 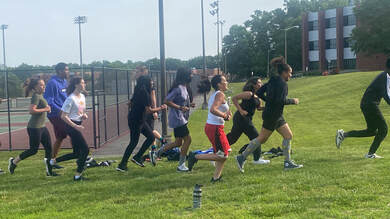 DAY 2: JUNE 7, 2022
This morning, the PT Team started off. Platoons ran a lap around the band field, and did stations consisting of different exercises. After PT, the rising NS1's had an introduction to the Drone Team. They were able to see a drone fly around in the hallway and how the drone works. Drill/Color Guard started teaching facing movements (left face, right face, and about face). Orienteering made points on a map and went outside to do pace counts. Air Rifle continued shooting in the prone position and learned how to shoot in the kneeling position. Lastly, Supply has been finishing up sizing cadets in uniform and PT gear. People already began showing interest in most of the teams and have started contacting the team commanders! Day 2 ended on a high note for everyone in Black Hawk Basic.
Article written by Cadet Kaila Kratz - Public Affairs Officer
Pictures taken by Cadets Kaila Kratz and Nehemiah Thompson - Public Affairs ​ 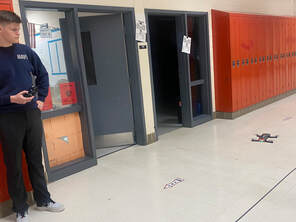 DAY 1: JUNE 6, 2022
​We welcomed upcoming NS1's with an introduction/presentation to the teams: Drill/Color Guard, Air Rifle, Orienteering, and Academics. Drill/Color Guard practiced basic movements such as attention, parade rest, and hand salutes. Air Rifle was able to have rising NS1's use the rifle for shooting at targets. Orienteering showed an orienteering map and taught them parts of the compass, colors on a map, different kinds of hills, and they got to learn how to use a compass on the map. Lastly, Academics went over uniform measurements, grooming standards, the phonetic alphabet, and played a Kahoot! afterwards. Day 1 was a huge success!
Article by Cadet Kaila Kratz - Public Affairs Officer
Pictures taken by Cadets Kaila Kratz and Nehemiah Thompson - Public Affairs
GRADUATION: MAY 21, 2022
Congratulations to all Brooke Point graduates! We are proud of our NS4's and other seniors who have committed to the program. The Battalion Color Guard presented the colors for graduation. The following cadets who participated in the Color Guard were: Cadet Abi Bullock (Commander), Cadet Melissa Lopez-Valdez (Commonwealth), Cadet Hannah McGowan (Right Rifle), and Cadet Jaylen Guerrero (Left Rifle).
Article by Cadet Kaila Kratz - Public Affairs Officer​
GRADUATION SET-UP: MAY 18, 2022
Cadets helped set-up graduation by putting and organizing chairs for graduates and their families. Some cadets volunteered to stay longer to help with any other preparations and cleaning up the area. Everyone came together as a team to get everything done in a timely manner and sufficiently.
Article by Cadet Kaila Kratz - Public Affairs Officer
Brooke Point High School Navy JROTC